But seriously, why is it taking Mike ten minute to quality check a cheese pizza?

My meds situation is straightening out and I'm so pleased about that I could just squee.  And I went as far as to have some conversations with people that were extremely uncomfortable in the abstract anticipation stage and yet fairly easy to have and really satisfactory in their resolution.  To stand firm and say "These are my needs" and believe that my needs were as valid as theirs.  That they were needs at all rather than pathetic wants I had because I wasn't strong enough/good enough/trying hard enough.  That people who aren't broken don't need these things.  That was extremely hard for me, and I'm not even sure what the motivation was that got me over it, that deserves some more thought.

And to have the reaction be "Well of course!" or "I feel the same way!"  No questions or judgement, and a coming closer together afterwards, more honesty on our interchanges?   Unbelievable.  And hopefully that'll inform future situations where I find myself wary.  Of course the first time I come up against a negative reaction I anticipate being thrown back about 20 paces.  I'm not sure how I'll handle that.  Probably that deserves some more thought as well.

Take home lesson:  Stop assigning beliefs and reactions of your own fears to other people, Mel.  I'm not saying it's all going to be sunshine and roses, but the whole world doesn't think like me, and it's solipsistic to assume it.  Plus, it hurts.  And I'm trying to stop hurting myself recreationally.  (figuratively speaking, no actual self-harm happening at all)

In conclusion:  Still self-medicating with Claudia Black because as it happens, she makes me feel better even when I'm properly medicated.  :D It's a snow day and Tiny is quietly playing computer games. Steve is quietly bustling about and shoveling and cleaning. I am attempting to not pass out from some kind of epic sleepiness I'm assuming is brought on by a combination of Wellbutrin withdrawl and shockingly little sleep over the weekend.

I haven't written anything in.. eons. (Except for that thoroughly filthy Mary Sue librarian thing I wrote for

winterlive because she's the angel and the devil on my shoulders) But I've been slowly percolating a story for about a year and Saturday night my brain screamed short ideas at me at about fifteen minute intervals between midnight and 3:30. I'd be like "NO! WE ARE SLEEPING!" and just as I began to drift off some part of my gray matter would holler "AND THEY STILL LIVE IN THE TOWER!" I'd just sigh and roll over and grab my phone and type it into Evernote and try to go to sleep again. Later, rinse, repeat. At four am I finally moved to the guest bed so that if I continued thrashing about in irritated creativity I wouldn't wake Steve and that seemed to be the trick.

Still had to be up early to get Tiny to her skating lesson though, so I've been recovering ever since.  I have seen few things in my life funnier than little tiny kids ice skating.  They're like the worlds' cutest bowling game out there.  Just falling down and getting up and falling down and getting up.  There's one kid whose dad is a goalie for the local rotisserie league and dad has the kid out there in a goalie mask and goalie skates.  Watching a five-year-old try to get back up after a fall with no toe pick and blades that long is both pitiful and hysterical.   I'm a horrible person and I'm okay with that.

Thank you for the sympathetic wishes, I finally found my keys. They'd slipped down between the back of the back seat and the bar that holds the pull-out hatch cover and I would have completely missed them if I hadn't been walking behind the car and seen that my one of my shoppers card tag had gotten stuck sideways in the slot.

I've been lucky as well to have

laughing_baubo listen to me moan about having binge-watched Farscape (better later than never!) and that's made me considerably less cranky. And the shots of Evans from the Oscars last night haven't hurt either. (Y'all, I will not survive the Winter Soldier press tour. Just be aware.) Tonight it's new True Detective and last week's Hannibal and Vikings season two premieres.

Or it's sleeping like a log. Either one is good. And THIS is my crazy exciting wild life.

Y'all , I have lost my keys. INSIDE MY CAR. it's open and I can get in and I haven't gone anywhere since I got here. I fucking hate this day.

Tomorrow I have to go to a six-year-old's birthday party. Y'all, I swear to God. It's like a special circle of hell. It's at one of those indoor bounce parks, which is all good and well because it (in the words of Dara O'Briain) tires the feckers out. But it's loud and there are kids everywhere running into each other like some kind of screaming bumper cars. The last time I went to one the kid's parents had bought the "Glow" package. That means the kids all get glowstick bracelets and necklaces and they turn on the blacklight and play unts-unts-unts music.

Anyway, I'm taking a Kindle stuffed with fanfiction and I'm going to spend the whole time looking like I'm reading some kind of technical whitepaper and not smut. I love the school Chloe goes to but I don't have a lot in common with the other moms and socializing is sometimes really difficult. They tend to schedule social activities in the mornings or early afternoons because most of them don't work. I know it can't be true, but I always get the feeling Chloe is the only kid there who needs both parents' incomes to stay there. meh.

I was explaining this problem to my doctor, along with my complete crippling inability to tell my mother-in-law that I need some quiet time alone because I can't imagine that she wouldn't take it personally. And he said to me that at some point he wanted to talk about why I feel like I have to exert myself so much in social interactions and work on interacting in away that doesn't leave me exhausted and empty. I said I wanted a unicorn pony. He just gave me this quizzical look and I said "Oh, I'm sorry, I thought we were talking about impossible wishes."

My doctor is a prize-winning eye-roller.

Thank you all for being so lovely yesterday, I needed it. :)

I have spent the last couple of days bingeing on old sci-fi shows on Netflix and realizing that because they were pre-AO3 I'd have to go out and actually hunt down fic for them.  I realized there'd probably be an LJ community for them and that I'd just have to find the right one and then I missed this place with a fierce passion.  Even when I'm not posting I think about it at least once a day.

idk, there's not really a reason behind this.  Just feeling sentimental is all.

*keeping in mind that I just heard this in an audio book about the history of English and have not validated it in any way, I just thought it sounded cool. I'm about as reliable as your average public bathroom stall wall.

In other news, because it felt so good to get thoughts down and out of the swirling amorphous anxiety-well of my brain, I'm probably going to put up a post later talking about the homework my ED doctor sent me out with this week. I'll be about food and probably about shame and will absolutely include lines about how it's incredibly obnoxious of me to wank this much over my first world woes while there are actual big crises in the world. But then I shall imagine Kiltie giving me *stern face* and remember that just because it's globally small doesn't mean it isn't locally painful. Anyway, it won't be like the B&H posts and I expect it to be not at all inspiring, cheery, and may very well be triggering to those dealing with anxiety disorders, food issues, etc. So raise your hand if you'd like to be on it. By default I'm excluding everyone else because.. well.. it's wanking. And like masturbation it wont be pretty for y'all to watch, but I could certainly benefit from it.

Chloe's depiction of the Easter Island statues. Uncannily lifelike, no? 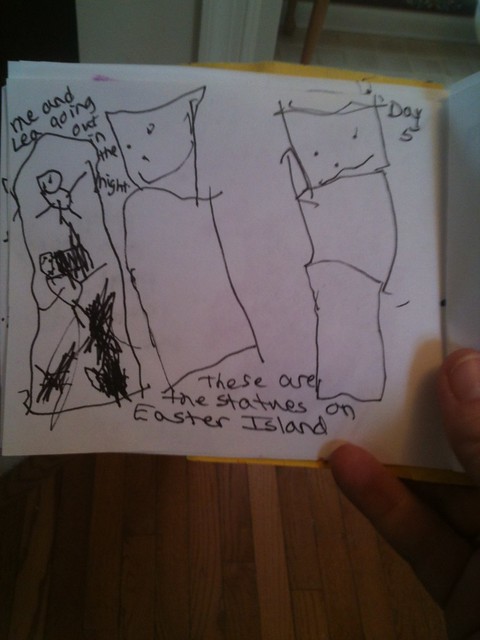 A follow-up regarding the series of books I mentioned yesterday. 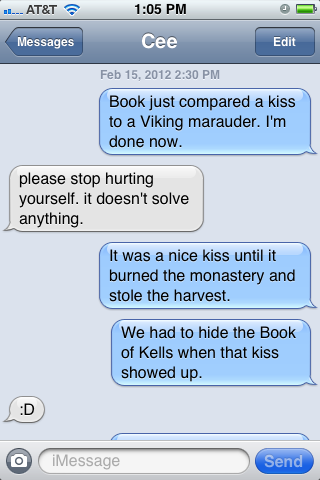 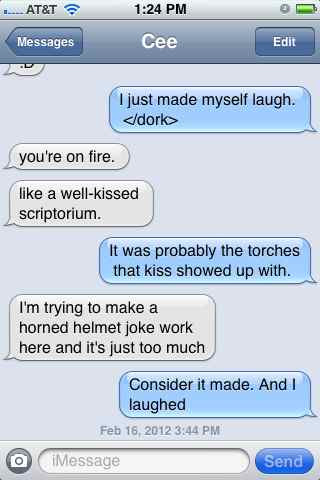